With 3:36 to go in the second half, Steffon Mitchell grabbed an errant Jordan Chatman three-point attempt and laid it in through contact. Following a timeout, he made the free throw to complete the three-point play and give the Eagles a 56-44 lead. 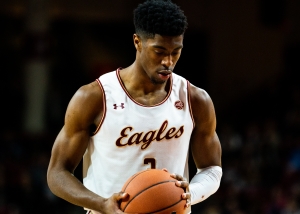 The Eagles rode that momentum to a 64-57 victory over the visiting Miami Hurricanes, picking up an important ACC victory.

Eagles’ coach Jim Christian praised Mitchell’s effort. “Steff, that’s what he does. He knows what he can do to affect the basketball game. He’s going to make the hustle plays, and he’s going to get offensive rebounds.”

Ky Bowman wasn’t his usual dominant self on the offensive end, likely partly due to the fact that he missed Saturday’s practice and Sunday’s team walkthrough with a 102-degree fever. Despite the illness, Bowman still left an impact on the game with eight rebounds and eight assists to go along with his modest six points, playing almost the entire game 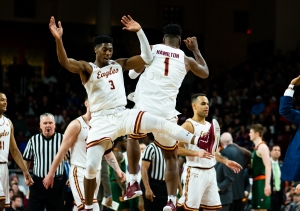 "He showed his courage and his guts," Coach Christian spoke to Bowman’s toughness. "That’s what he does. He’s a winner.”

BC’s defense was instrumental in earning the 13th win of the season.  The Eagles held the Hurricanes to just 36.7% from the field and 15.4% from the three.

Miami guard Chris Lykes came into the game eighth in the ACC in scoring with 17.1 ppg. The stingy BC defense limited the explosive scorer to 10 points on 3-15 shooting from the field, including a woeful 0-8 from three-point range. Guarded mostly by Bowman and Jared Hamilton, Lykes couldn’t get anything going as the Eagles kept him off balance throughout the contest.

The game got off to a slow start as neither team could muster any consistency on the offensive end. While BC shot 50% from the field in the first half, they turned the ball over 11 times, preventing themselves from being able to build a lead. The Eagles led 25-21 at the break despite shooting 20% better than their opponent from the field.

BC took much better care the ball in the second half, committing a much more manageable four turnovers. They built up a lead and started to pull away down the stretch.

Ball control and effort plays were instrumental to the Eagle’s second-half success. Along with Popovic and Mitchell’s consistent energy on the offensive glass, Chris Herren Jr. had a huge putback layup while drawing a foul that sent a packed Conte Forum into a frenzy. The Eagles needed the high intensity and great defense on a night when they played a relatively sloppy game on the offensive end. 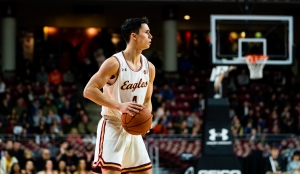 Jordan Chatman led the way on that end with 17 points while Nik Popovic added 15 points and 14 rebounds. Popovic, who missed the previous game with a concussion, was huge in his return, dominating the interior.

BC (13-11) hopes to carry this momentum into an important ACC matchup with NC State on Wednesday.

Meanwhile, Miami (11-14) will look to get back on track as they return home to take on Georgia Tech on Saturday.

Both teams will look to finish the season strong as they jockey for positioning in the upcoming ACC tournament.