Defense, Second Half Surge Propel Eagles to Victory Over Louisville

The game was all tied up, 53-53, with only 2:33 remaining. BC Guard Ky Bowman had the ball at the top of the arc while Louisville’s Khwan Fore mirrored his every move. Bowman, one of the quicker guards in the NCAA, pushed forward, hinting that he might try to slip past and drive to the basket.

Fore shuffled backward in anticipation of Bowman’s drive, but Bowman never ended up driving. Instead, he stepped forward, then lurched back, and nailed a three right over Fore, giving BC a lead they’d never give up. 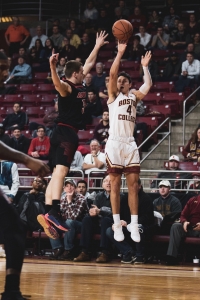 On the next possession, Louisville guard Christen Cunningham had the ball down low and looked to kick it out to Fore. However, BC forward Steffon Mitchell read the pass and came away with the steal. He and Jairus Hamilton raced to the other side of the court, as Mitchell’s pass set up Hamilton for an easy lay-in.

These two plays defined an 8-0 BC run and, eventually, a 66-59 win. This was the Eagles' first win over Louisville since the Cardinals joined the ACC in 2014. It also marked the end of a two-game skid for BC. Additionally, this is the third straight game in which the Eagles have held an ACC opponent under 60 points.

BC maintained the lead for the majority of the first half. However, the Cardinals went on an 8-0 run to finish the first, putting them ahead 23-22.

Both offenses seemed rushed to start the game. Neither team was taking the time to set up in the half court. It was 9 minutes into the game until the Eagles broke into the double digits. Ill-advised three-pointers quickly began to define the game. On the night, BC shot below their season average, making just 6 of 21 from behind the arc.

The Cardinals looked even worse, ending the night making just 5 of 24 three-pointers.

Throughout the night, Bowman propelled the Eagles on offense with a near triple-double, finishing with 25 points, 12 rebounds, and 8 assists. Bowman struggled from the field (6-18), but made 10 of 14 free throws.

BC big man Nik Popovic helped ignite the team, as he scored the Eagles’ first 6 points of the second. Popovic ended with 16 points and 9 rebounds. 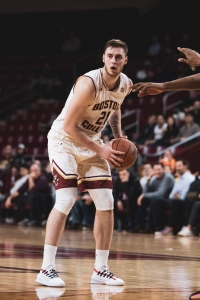 Both offenses struggled to find any rhythm as they each shot under 40% from the field. BC’s tough defense—and Louisville’s carelessness with the ball—ended up being enough to separate the two struggling offenses. BC only had 4 turnovers, while Louisville had 14.

For the Cardinals, center Steven Enoch provided a career-high 22 points off the bench, along with six rebounds and a block.

The Cardinals held a distinct rebounding advantage over BC, grabbing 8 more boards. Louisville's Jordan Nwora provided 13 points and 12 rebounds to lead the charge for his team on the glass.

While this game won’t save the Eagles' season, it is a win that fans can be grateful to have. With the win, BC (14-13) gets back above .500 on the season. The Eagles have just 3 games remaining in the regular season. Next up, they’ll travel to Atlanta, GA to take on Georgia Tech on Sunday, March 3.