After falling to Northeastern at Friedman Diamond on Tuesday, the Boston College baseball team rebounded nicely with a 7-5 home win against the Siena Saints. Despite a low scoring game against the Huskies, the Eagles’ bats had no problem producing runs in BC’s second game of a back-to-back.

Both pitching staffs performed well in Tuesday’s game at Friedman Diamond, combining for 19 strikeouts. BC starter Joe Mancini exited the game after four innings pitched and two runs allowed, while Northeastern starter Kyle Murphy finished with zero runs allowed after three innings of work in his first start of the season.

The Huskies jumped out to an early 2-0 lead after Corey DiLoreto’s triple in the bottom of the first inning and an RBI single by Michael Geaslen in the second. BC trimmed the deficit to one run in the eighth, but a two-out rally fell just short and left the tying and go-ahead runs in scoring position. This happened often as BC left twelve runners on base, and ten of those twelve in scoring position in a 4-2 loss to the Huskies.

Despite a mediocre offensive effort as a team, the Eagles’ freshman trio of Sal Frelick, Cody Morissette, and Peter Burns was impressive, finishing a combined 6-12 at the plate. Frelick and Morissette each doubled, while senior Jake Alu also added a double and RBI, finishing 3-5.

Wednesday afternoon, in BC’s single-game series versus Siena, the Eagles came out strong, posting three runs in the bottom of the second after falling behind 1-0 early. Eagles relief pitcher Zach Stromberg entered the game in relief of Michael Marzonie in the top of the third and escaped a jam with two consecutive strikeouts. He went on to escape another bases-loaded jam in the top of the fifth and then exited the game with two runs allowed.

BC was running the bases well all day, recording five steals. In the bottom of the fifth, Cody Morissette stole second reading a ball in the dirt, and then scored on Gian Martellini’s two-out RBI single to preserve BC’s lead.

Siena came storming back and tied the game at five runs apiece on a single up the middle just out of shortstop Brian Dempsey's reach. However, BC answered right back with two runs in the bottom of the seventh and Travis Lane picked up the save with two strikeouts in the ninth, preserving a 7-5 victory.

BC now looks to take its momentum into a three-game home weekend series versus Clemson. Clemson is coming in with a 16-5 record (4-2 ACC) and having won eight of their last ten contests. The series will take place this weekend at Harrington Athletic Village. 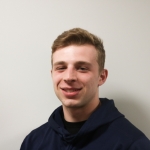