Home›Features›October is an Annual Reminder of Breast Cancer Awareness

October is an Annual Reminder of Breast Cancer Awareness

Features, Outside of BC
by The Gavel

October is Breast Cancer Awareness Month, and every year it brings about a celebration of survivors, a sense of empowerment and unity among those fighting it, and bouts of donations to fund support and research. In the time and place we are in right now as a country, this month and its purpose are perhaps more significant than ever before.

Late Supreme Court Justice Ruth Bader Ginsburg may not have fought breast cancer, but she did fight colon cancer, lung cancer, and pancreatic cancer. Not only that, but Justice Ginsburg was also a fierce fighter for women’s rights.

“[Justice Ginsburg is] an icon of female empowerment,” an anonymous breast cancer survivor stated, continuing, “when I had hit some of my darkest and most painful moments as a patient, what kept me going was largely the support I felt from family members and friends, but I was also motivated by strong female figures in society like Ruth Bader Ginsburg.”

She went on to say that Justice Ginsburg “served as this constant reminder for me to uphold hope and strength, as I would tell myself, ‘If RBG can be engaged in this cancer fight while still managing to serve the people on our nation’s highest court, then I think I can manage the darker moments without having to give up happiness and hope.’”

The recent passing of Ruth Bader Ginsburg and the timing of it in relation to Breast Cancer Awareness Month makes this a powerful time to reflect on the work that Ginsburg did for women as well as women with breast cancer. A statement given by Susan G. Komen Philadelphia called Ginsburg “A tenacious champion of change to bring about equality, opportunity, and the elevation of women.” In their statement, the foundation also mentioned that Ginsburg leaves “a legacy we proudly carry on as we advance our own mission.” This signals the need to not only reflect, but to persist in supporting each other and blazing through the physical and societal battles women regularly fight.

Breast cancer not only impacts those who are immediately affected, but it deeply changes the lives of friends and family. Another woman we interviewed saw first-hand the toll that breast cancer can take on families. Her grandmother, mother, and aunt were each diagnosed with breast cancer. Understandably, this was a very dark time.

“It can be incredibly scary knowing that your future most likely holds that for you,” she said, in reference to families with a history of breast cancer. “Genetic testing is scary as-is, but when they are searching for a gene that has the potential to change your life forever, the fear can be insurmountable,” she said.

While breast cancer is a deadly disease, it is a huge testament to the strength of women. She added, “it showed me a different side of my mom. [I] always knew she was fearless and confident but with such a feminine issue, she showed incredible strength.”

Going through something as harsh as breast cancer can change one’s perspective of female strength. Seeing a family member go through breast cancer is never easy, especially when surgery comes into play. The woman we interviewed watched her grandmother undergo a double mastectomy, a serious procedure in which both of the woman’s breasts are removed in order to ensure the destruction of all cancerous cells. As a disease that predominantly affects women, it is impossible to talk about it without discussing female strength. 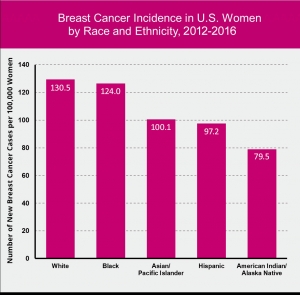 Photo courtesy of Susan B Komen 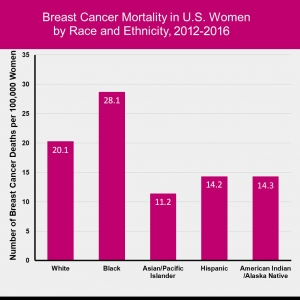 Photo courtesy of Susan B Komen

When bringing gender into the discussion surrounding race and breast cancer, it is critical to note that breast cancer affects men too, albeit in small numbers; they make up less than 1% of those diagnosed. To add racial identity to the dynamic of male breast cancer, a study from the JNCI Cancer Spectrum found that “Black men had a 52% higher rate of breast cancer than white men,” but are less likely to detect it due to the stigmas surrounding male breast cancer. These statistics shed light on the lack of— and need for—the application of an intersectional lens to breast cancer so that we are able to support all patients and survivors.

Support comes in many forms, and there are numerous organizations to donate to in the name of this cause. During the month of October, the Breast Cancer Research Foundation is doubling all donations in an effort to “prevent and cure breast cancer by advancing the world’s most promising research.” Another foundation to support is the National Breast Cancer Foundation (NBCF). When donating to NBCF, one can choose directly where a donation will end up: screening, education, support, or the general fund. They work to “help women now by providing help and inspiring hope to those affected by breast cancer through early detection, education, and support services.” These organizations and many more contribute heavily to the fight against breast cancer. Finally, keeping oneself safe is necessary as well—an additional way to take action is by performing a self-assessment, shown below. 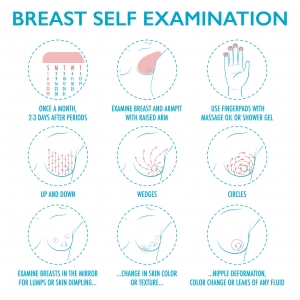 As October draws to a close, Breast Cancer Awareness Month does too. Nevertheless, awareness and support for breast cancer patients and survivors, as well as their friends and family members, exists in a year-round cycle. Every day, there are people receiving breast cancer diagnoses, treatment plans, chemotherapy, surgery, news that they have won their battle, and news that they have lost it. Therefore, it is imperative that we continue to support them (and ourselves) in Breast Cancer Awareness Month and beyond.