The Latinx Vote in the 2020 Election

BC News, News, Off Campus
by Grace McKenna

The Organization of Latin American Affairs & Latinos/as hosted The Latinx Vote in the 2020 Election event on Wednesday, Oct. 7. With the presidential election rapidly approaching, the student-driven event shed light on the importance of voting this year, specifically the significance of the Latinx vote.

The event featured panelists David Hopkins and Kay Scholzman, professors in Boston College’s political science department. Additionally, Kari Hong, a professor at Boston College Law School, sat on the panel. The event was moderated by Jesse Rascon, who graduated from Boston College in 2019.

The first task for the panelists was to define the Latinx vote and key features of this voting bloc.

Scholzman initiated the conversation by highlighting some of the differences among Latinx voters that are relevant in politics. One of these characteristics is geography, or where Latinx people live. California and Texas make up the two states with the highest proportion of Latinx citizens. California is a blue state and Texas is a red state. Nationality of origin also plays an integral role in differences between Latinx citizens. For example, Mexican-American voters differ greatly from Cuban-American voters.

Other differentiating factors include how long Latinx individuals have lived in the United States and the circumstances of their countries of origin. Those who came to America from socialist countries are more likely to be conservative and Republican. On the other hand, those from more right-wing authoritarian countries are more likely to be Democratic and liberal.  Latinx voters also vary in religious denominations. As a result of this diversity, figuring out the issue preferences of Latinx voters in a general sense is very difficult.

Hopkins then addressed whether a national Latinx vote exists or if regional expressions will vary in this election.

“Often the story you get in the media is a simple story, and the reality is a much more complex story. One of the ways that’s true is that sometimes everyone who is a person of color gets lumped in together,” said Hopkins.

Hopkins acknowledged that while there are areas of commonality, there are very important differences between racial minority groups. The Latinx vote is different from a white non-Latinx vote, but within these votes there are other qualities that have an impact on the election.

This is especially prevalent in Texas, where whites are only a plurality of the state but represent the majority in terms of who is showing up to vote.

She also acknowledged that the Latinx population is generally young. Latinx households are more likely to have children than other ethnic groups. “As they age, they will be a larger proportion of the American electorate even if we don’t have massive immigration,” said Scholzman.

Hopkins then touched upon the topic of voter suppression, acknowledging that the reason California has higher rates of Hispanic voter participation than Texas is because accessing a ballot is more convenient. Florida is another state with a large Latinx population in which voting can be difficult. Factors that complicate voting accessibility include the introduction of ID laws and the closure of polling locations.

Scholzman and Hong introduced the Shelby County v. Holder Supreme Court case of 2013, which struck down the portion of the Voting Rights Act requiring federal preclearance for changes to voting laws and practices in certain states.

“These cases that come down, especially from the Supreme Court, have enormous consequences that aren’t necessarily visible immediately but are very consequential, very quickly,” said Hong.

Rascon then asked the panelists to give an overview of how the Latinx community has been impacted by the Trump administration during the past presidential term.

Hong spoke to the 400 rule changes to immigration policy spearheaded by the administration, including initiating deliberate family separation, attempting to end the DREAM Act, rescinding TPS, and upholding expedited removals. She also acknowledged that there are credible allegations of forced sterilizations by ICE in the Irwin County Detention Center in Georgia.

Hong then addressed Biden’s commitments pertaining to immigration policies. On his first day in office, Biden has promised to provide legal status to Dreamers through executive orders and congressional legislation.

Within the first 100 days, he plans to rescind the travel ban, end the crackdown on sanctuary cities, reverse the deportation of TPS individuals, and stop the separation of families in prolonged detention. He also plans to introduce comprehensive legislation, which will provide a pathway for the 11 million individuals who do not have status to earn status in the US. Biden is determined to return humanitarian aid to Central American countries, stop building the border wall, and increase funding for monitoring and screening at the border.

Hong emphasized that one of the most important aspects of Biden’s administration will be his attorney general.

“Of these 400 rule changes, a substantial number have occurred through the attorney general. The cleanup is going to have to have someone who is as aggressive and attentive to the ways that immigration has been destroyed in order to build it back up,” said Hong.

“There’s no indication in the polls that there’s any reinvention of the Latino political realignment as a result of Trump. There are significant numbers of Latino Trump supporters still today as there was four years ago,” Hopkins stated during the question and answer portion of the event.

To this Hong responded, “Over sixty percent of the American public support expansive comprehensive immigration reform, which is the highest we’ve ever seen in decades.”

The final topic discussed by the panel was the effect of climate change on Latinx citizens. Hopkins concluded that both demographic and geographic factors play a role in the level of concern Latinx voters have for climate change. He returned to the fact that the Latinx community is a young community, and as a result, issues such as climate change are a special concern of this population. Additionally, global temperature changes and sea levels rising will affect areas of the US where many Latinos live.

“Make a plan,” Scholzman stressed at the end of the event, “and if you need help, there are websites that give you information on how to find out if you’re registered and what the options are for voting in different jurisdictions.” 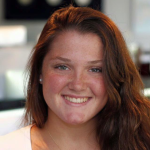 Business major with a passion for adventure.