Notre Dame came into Saturday’s Red Bandana Game as the second-ranked team in the country following its defeat of No. 1 Clemson, and Brian Kelly’s squad played up to expectations. Following a slow start in the first quarter, the Irish steamrolled the Eagles en route to a 45-31 win.

The win marks Notre Dame’s seventh consecutive win over Boston College, not including a vacated 2012 victory. 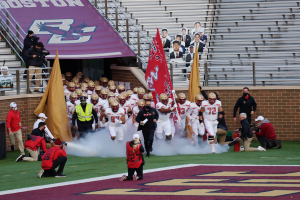 The biggest holes in BC’s defense were the ones created by the Fighting Irish offensive line. Notre Dame is a perennial powerhouse when it comes to run and pass blocking, and 2020 is no exception. The big men up front imposed their will, forcing massive gaps for Kyren Williams to sprint through. The Fighting Irish averaged nearly six yards per carry as a team.

The Notre Dame offensive line’s success translated to pass protection. Ian Book felt almost no pressure in the pocket all night. His ample time to throw allowed him to consistently find open receivers and avoid mental mistakes. On the rare occasion that BC's front seven was able to apply pressure, the rest of the defense had retreated deep into the secondary, leaving plenty of green grass for Book to run with the ball.

In contrast to Book’s Heisman-like play, Phil Jurkovec struggled to lead BC’s offense. In his first game against his former team, there were points that he looked like Johnny Manziel in college. In the second quarter, Jurkovec spun out of one tackle, broke another, and then heaved the ball 40 yards downfield to Jaelen Gill just before taking a massive hit. 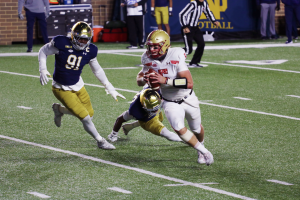 Conversely, there were other points that he looked like Johnny Manziel in the NFL, including a fumbled snap and a pick thrown directly into the arms of a waiting defender with no receivers in the area.

After the game, BC head coach Jeff Hafley revealed that Jurkovec’s struggles were due to more than just continuing to adjust to a new system. The sophomore quarterback has been playing through a separated shoulder that he sustained against Clemson. Going into the Syracuse game, he could barely lift his arm above his shoulder and had hardly practiced going into the game.

Hafley said he believes that Jurkovec’s ability to play as well as he has through this injury shows both his toughness and his ability to function as the leader of the team.

“I don’t know that there’s any quarterback in the country I’d rather have leading this team right now,” Hafley said.

Jurkovec was far from the main issue on the offensive side of the ball. His dynamic play allowed the Eagles to stay in the game as long as they did. Rather, it was BC’s inability to spark the run game that prevented them from gaining traction. As a team, they averaged just over 3 yards per carry. Travis Levy played the role of the lead back, outpacing David Bailey in carries for only the third time this season. Bailey has had better efficiency overall this season, but Levy averaged nearly twice as many yards per attempt on the night.

Red zone struggles plagued the Eagles throughout the night. They marched down inside the 20-yard line seven times in the game, yet were able to produce touchdowns only twice. This inability to maximize their key scoring opportunities is something that the Eagles need to improve upon if they want to continue to win games. 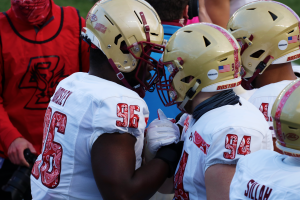 After the loss, BC stands at 5-4 on the season. Their 4-4 conference record puts them just inside the top half of the ACC standings. The Eagles will have a bye next week—their first of the season—before moving on to Louisville and Virginia to close out the season.

After playing teams currently projected to make the College Football Playoff in two of the last three weeks, the lesser opponents remaining on their schedule should hopefully yield much better results for the Eagles.

Be sure to follow @BCGavelSports for all of the latest updates on Boston College athletics.