International Students Discuss Their Perspective on COVID and Other Global Issues

BC News, News, Off Campus
by Sally Carpenter

The Office of International Programs hosted the online panel "A World in Crisis" on Wednesday, Nov. 11, featuring several international students who shared their unique perspectives on a number of national and global issues, most notably the COVID-19 pandemic. The panel's topics included conversations about student visas, COVID-19, travel bans, racial identity in America, and religious discrimination abroad. The OIP was celebrating International Education Week, with the theme “Exposing the Fault Lines: Embracing Social Justice in the Wake of Crisis.”

The panel was moderated by Dr. Erik Owens, the director of the International Studies Program, and featured the following panelists: Jingyi Xu from China, Carrie Park from South Korea, Hollie Watts from the United Kingdom, Hilary Nwainya from Nigeria, Juan Carlos de la Guardia from Panama, and Ata Chowdhry from India and Saudi Arabia.

Jingyi Xu, LSE '21, is currently completing her senior year online in Beijing. “I’m glad that I stayed in China,” she said because the severity of COVID-19 in the USA would have hindered her daily life more so than it does in China. However, she admitted that online learning is difficult, especially since the time difference limits her class choices. The pandemic has dramatically changed Xu’s plans for her future. She had been counting on the idea that she would stay in the USA for graduate school. However, due to the complications of travel restrictions, she is now considering her options in higher education elsewhere, such as Europe or Hong Kong.

Carrie Park, an undergraduate, spoke about the differences between COVID-19 responses in the USA and South Korea. When asked about how the pandemic has changed her perspective on the USA, Park nervously laughed, “Can I answer this honestly?” After a chuckle and a sign of  approval from the moderator, she continued, “To be honest, America’s response to this COVID-19 was pretty shocking for me.” She expected more rapid action and overall preparedness. Having lived in the USA during the Obama Administration, she pointed out, “It might be the change in leadership,” referring to the Trump administration. Additionally, Park mentioned the 2015 MERS outbreak in South Korea and cited it as an important factor in South Korea's COVID-19 response. South Korea’s “failure to respond to MERS” allowed them to be more prepared for COVID-19. This, Park believes, is a sign that the USA, due to their failure with COVID-19, will be better prepared for a future pandemic.

Hollie Watts, MCAS '21, from the United Kingdom, also shared her thoughts on the coronavirus and the Trump administration. When BC announced that they would be moving classes entirely online back in March, Watts said she experienced significant anxiety about making it home as a result of travel bans. Watts also emphasized the double standard that she sees in the current relationship between the USA and the UK. Currently, UK residents cannot travel directly to the USA, but USA residents can travel to the UK as long as they self-quarantine. “Travel bans are supposed to be based on public health, and they seem to be based on politics,” Watts observed. She expressed relief at Vice President Biden’s victory in the election.

COVID-19 was not the only topic addressed by the panel. Fr. Hilary Nwainya, a Catholic priest and current doctoral student at Boston College, spoke very powerfully about racial identity in the USA. Before moving to America, Fr. Nwainya lived in Ireland for a number of years. Remembering his time there, he said he felt like a foreigner, but “never felt like a Black person.” Then, moving to the USA, he recalls, “It’s all about being Black, it’s all about color.” He spoke of anxiety when stopped by the police. He also spoke of the murder of Ahmaud Arbery, and how the horrific event directly affected his daily routine. He now only goes jogging in daylight. “These are things that never worried me while I was in Nigeria and while I was in Ireland.”

Juan Carlos de la Guardia is a CSOM graduate student, originally from Panama. He expressed the opinion that the American government must make it easier for international students to stay and work post-graduation in the USA. Otherwise, the incentive to pursue an American education will decline.

Ata Chowdhry, MCAS '21, used her time as a panelist to speak about the more overarching and personal meaning of being an international student. Being a Muslim woman born in India, she has a deep personal connection to the issue of religious discrimination. “Coming to the US, and being at college, and meeting so many people has given me the platform to raise awareness about these issues,” Chowdhry said, regarding the hardships Muslims are facing in India. To her, international education is a tool for connection and empowerment.

In an increasingly globalized and increasingly divided world, international students provide a unique and important perspective. Their take on global crises such as COVID-19, as well as their experience of various cultures, allows them to see the world in a way few others can. Now, the fate of international students is more uncertain than ever. They will undoubtedly continue to feel the effects of global catastrophes, cultural shifts, and political changes beyond the end of the Trump administration. However, most of the panelists expressed relief at Joe Biden’s victory in the presidential election, seeing it as a ray of hope for their continued safety and education in this country. 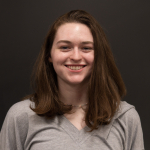