Ranking the Best Alternate College Football Uniforms From this Past Season

An underrated aspect of every season, in my opinion, is the uniforms; schools across the country represent their institutions with a unique combination of colors, designs, patterns, and more that their fans and alumni proudly don any given Saturday.

With that being said, not every uniform is pleasing to the eye. Some reek of inspiration from high school uniforms or Sharpie highlighters. Others, like Oregon, have an unfair advantage over other schools with their close ties to alumni from the most innovative athletic clothing brands.

I broke down the ten best alternate uniforms across all of FBS football teams, with images and their inspirations below from this past 2020-2021 season (standard home and away jerseys were not considered). 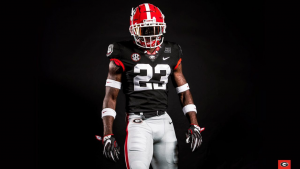 Georgia Football has rocked some red and black uniforms in the past, but this year’s edition featured a spiked dog collar design around the neck with the bulldog logo on the sleeves. While the first red and black uniforms first appeared in 2007, the Bulldogs debuted these updated uniforms against Mississippi State this year, which I’m sure played a factor in their 31-24 win over their Bulldog counterparts.

Without a doubt, these uniforms are some of the toughest across the country. Some may not be a fan of the updated feature of the dog collar, but I like the homage to their living mascot “Uga.” We’ll see if these stick around for another year or if they return back to the simple red and black. 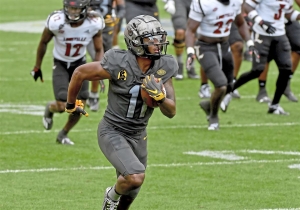 Photo courtesy of the Pittsburgh Post-Gazette

These uniforms debuted early in the season against Louisville and are covered in steel-gray from head to toe with gold from their regular uniforms dropped in the logos of the school and Nike swoosh. This uniform pays respects to the city’s history as the former center of the steel industry. The designs feature a metalworker patch on the front left, an H2P (school’s “Hail to Pitt” slogan) logo on the right sleeve, and a P for Pitt on the left sleeve.

Man, does Pittsburgh have some great uniform history. If this list compiled regular home and away uniforms, their blue and gold uniforms would be high on the list. For these ones, I think the helmets are the coolest part, almost as if it was forged from steel itself with a beaten and worn out look to it. 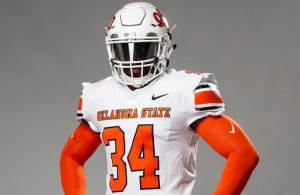 The school debuted their 1987 throwback uniforms against West Virginia this past season to pay respect to former Cowboy running back, Thurman Thomas. Thomas was a legend for Oklahoma State, rushing for over 5,000 yards and racking up three All-American appearances, cementing himself as a Hall of Famer in both College Football and eventually, the NFL.

Thomas wore these uniforms in the last game of his career at Oklahoma State (against West Virginia), so the school thought it would be appropriate to bring them back for their game against the Mountaineers again. They feature black and orange stripes on the sleeves with an old school logo on the helmet.

Wow, these are clean uniforms, the school hit it out of the park with these ones. They do remind me of the current Browns uniforms a bit, but with a different shade of orange. They’re definitely simple, but sometimes, a perfect color scheme is all you need to succeed. 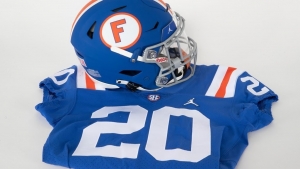 Back-to-back throwbacks on this list, the Florida Gators' retro uniforms from the 1960’s were used last year, but brought back because of the rave reviews they drew from fans across the country. These uniforms go back all the way to when Heisman winner, Steve Spurrier, was the starting quarterback.

I’m definitely a bit biased because blue is my favorite color, but these are objectively awesome uniforms. While the color scheme is amazing, the helmet logo surrounded by blue is the best part of the kit. I hope they bring these back out for another year. 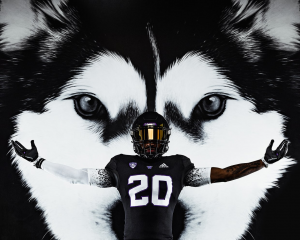 The Huskies went crazy on these uniforms, bringing out a blackout uniform, but with a subtle purple outline around the numbers and letters. Purple is such an underrated color, and Washington, as well as Northwestern, jerseys have always produced quality uniforms year after year donning the black and purple.

The accessories in tandem with the jersey inserts this combination into the top ten. From the all-white shoes, to the purple eyes of the husky on the gloves, to the gradient transition on the arm and leg sleeves - the uniform goes together so well. Adidas isn’t known for many good uniforms in CFB, but these are some of their best. 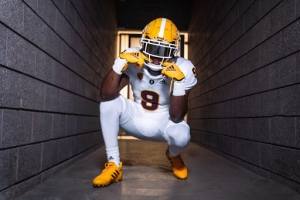 The school decided to “ice out” their uniforms by going all white shirts and pants with gold helmets, cleats, and gloves. On either side of the white stripe on the helmet is the iconic pitchfork logo, outlined in white. 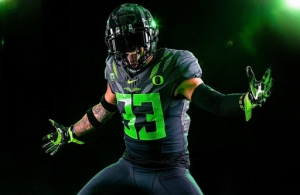 If you’ve watched Lilo and Stitch, you know Ohana means family in Hawaiian and Samoan. If you also watch Oregon Football, you know they deliver some of the best college football uniforms every single year. They definitely didn’t disappoint this year, bringing out their Ohana uniforms to celebrate the Polynesian culture in the Pacific.

Oregon worked in collaboration with designers from Hawaii and has previously featured players with Polynesian descent, including former QB Marcus Mariota and current OL Penei Sewell.

The detail behind this uniform is absolutely incredible and the respect it pays to a beautiful culture is the most important part. All of that plus its visual appeal cements Oregon’s 2020 alternates in the top five. 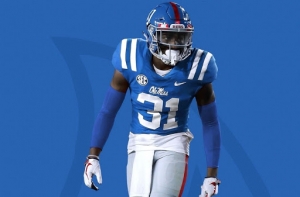 Lane Kiffin kicked off his Ole Miss tenure with a hot start this past year against the Florida Gators. I’m not talking about his performance on the field, because they gave up 50 plus at home in a loss to an SEC rival, but with the uniforms.

The powder blue uniform and helmet combo was originally worn in a 30-year stretch from the 1940s to the 1970s, but never returned into their repertoire until now.

Ole Miss paired their powder blue uniforms with a powder blue helmet for the first time this season. The numbers, letters, and designs all were filled in with white and the pants filled in with gray, both producing a great color contrast. Also, the Ole Miss cursive font is a nice touch, in general. 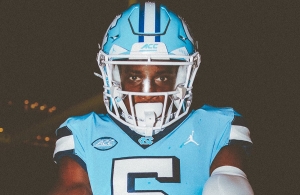 The last time the UNC Tar Heels donned these uniforms was when current Head Coach Mack Brown last coached the Tar Heels back in the 1990s, where Brown spent ten seasons as the coach and brought the program back to national prominence. He is doing that again down in Chapel Hill with the help of some from the jerseys worn during his first stint with the team.

Nothing tops Carolina blue in my book, but that’s not why this jersey comes in second. The block numbers on the front and back, the white and black stripes on the sleeves, and the white and blue stripe on the helmet all combine to make this uniform an all-time classic. I get the sense that these will be here for a long, long time. 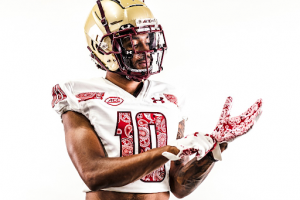 This was the easiest choice of them all.

Everyone at BC knows the story of Welles Crowther and the “Red Bandana,” a hero who risked his life to help others during the tragic events in 2001. These uniforms celebrate the life of Welles and all he stood for as a human.

The uniform was essentially the same as past years' editions, except no changes to the helmet. The red bandana pattern is everywhere else, from the numbers, to the gloves, to the pants, to the sleeves, and to the cleats.

Though BC Football previously worked with Under Armor to make this uniform happen, a new-sponsor, Adidas, will undoubtedly keep these alternates in the lineup for next season for the next Red Bandana game, a game that simply means more than any other.