March Madness: A Distraction from the Chaos

It’s that time of the year: March Madness. After it was canceled last year due to the outbreak of COVID-19, it has made its much-anticipated return. Even though the environment surrounding the games is different and images of packed student sections have been replaced with emotionless cardboard cutouts, the charm of the tournament is still there. Brackets were filled, challenges were made, and the Cinderella teams immediately began making noise.

While it's unfortunate to not see Boston College represented this year, it has still been a blast to root for certain schools. Particularly, the underdogs such as our fellow Jesuit counterparts, Loyola Chicago. 101-year-old superfan Sister Jean alone deserves the fandom. Cinderella teams like Oregon State also made a splash. Of course, teams like Oral Roberts and UCLA made plenty of headlines this year. UCLA, an 11-seed, made their way into the final four. Potentially most shocking was Gonzaga coming into the title game as an undefeated juggernaut only to get blown out by Baylor. The win was Baylor’s first national championship in school history.

March Madness has served as a healthy distraction. The tournament alleviates long days of cramming for midterms and binging readings by providing entertainment to enjoy with friends. Not to mention, the games themselves have been very entertaining and many have often gone down to the very last second. It has been an undoubtedly stressful semester on campus, and this year’s tournament has helped to relieve a lot of the anxiety caused by academics, COVID-19, and other stressors.

College basketball has always been known for its electric atmosphere. Its loud crowds and booming student sections are unlike any other. Audiences just don’t get the same feeling watching the NBA playoffs as they do with the NCAA tournament. There are no brackets to be filled out, and there are hardly any significant upsets or Cinderella teams. With the NCAA, the games are one-and-done as opposed to a best-of-seven series. This component only propels more excitement by making major upsets more probable. There is no “first four to final four” in the NBA, or quite frankly, any other sport.

With midterms occurring, it has been a stressful time on campus, not to mention the continual stresses of COVID-19 as students anxiously wait for the vaccine.  “Burnt out” is a phrase constantly echoed throughout Chestnut Hill. While March Madness does not equate to an actual spring break--nor does the single day off that we were given---it can serve as a nice distraction for sports fans.  Sports have offered an escape for so many people, particularly in the past few months. March Madness is just the latest example. It has been refreshing to watch this tournament go on, as it is reminiscent of the “normal” times which we have been missing. 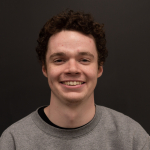