Home›Features›A Sophomore Perspective on Game Day at BC

A Sophomore Perspective on Game Day at BC

Features, On Campus
by Molly Caballero

For about half of the Boston College student body, the Colgate-BC and Missouri-BC games were the first semi-normal game day experiences. From about 8:00 in the morning, campus was buzzing with excitement as BC students set up tailgating tents with their families and groups met for breakfast in Lower. The campus felt alive, in a way that I, being a sophomore, had never seen before.

From the morning on, campus was packed with students and fans dressed in maroon and gold spending time with family and friends on lower campus. BC FanZone was in full swing, handing out free hats and food outside the recreation center for snacking students. The BAIC also hosted a cookout for students of color on campus which seemed to be a big hit.

The freshman class had the opportunity to rush the field just before kickoff of the Colgate game, sprinting into the stadium and filling the rest of the student section. The game started with a bang, with the Eagles scoring 27 points in the first half. Not knowing the cheers, my roommates and I ended up just mindlessly screaming until enough touchdowns were scored that we learned the cheers. The seniors in front of us were not impressed. Punctuating the first half was the amazing halftime put on by the Screaming Eagles Band and BC Dance and cheer teams. This show was complete with selections from Phantom of The Opera and well-timed flourishes of shining instruments. The second half continued the Eagle’s dominant run against Colgate. Rushing for 178 yards and passing for 347 during the matchup, the Eagles had an exciting start to their season, which continued with a thrilling overtime win at home against Missouri just weeks later.

Despite the excellent showing by the BC Football team, the real importance of this game day was bringing this community together. Game days can have a kind of mixing effect, as normally when you meet people they are in similar activities or classes as you. With a tailgate, there is more pure chance involved in meeting people. This helps underclassmen meet people who they would normally not encounter.

I personally found myself standing between someone I knew from my Ascend group and someone I met in my Courage to Know class. It felt like a literal “crossover episode,” as friends met friends and screamed along to the chants that half the student section didn't even know. It was utterly thrilling. This was the type of community that was lost last year. The random meetings, celebrating with people you have never met, and chance encounters that connect people and form friendships that were rare during Covid-19.

Isabella Decurtis, CSOM ‘24, speaks about her gameday experience, “I cried happy tears. It rained the whole week leading up to game day, but that morning was beautiful.  Everyone was so happy, and seeing the community come together after such a long Covid-induced break set an inspiring precedent for how the BC community will thrive in the future.”

I couldn’t say it any better. Game day was way more than a game. It was a chance for people to finally socialize outside of their own bubbles after an entire year of missed experiences due to COVID-19. 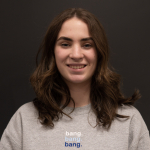 A sophomore whose core personality trait is having too many majors and minors. Talk to me about the Daredevil TV show, Moby Dick or musical theatre anytime.