A rough third period sealed the Eagles’ fate in their 3-2 loss at home Friday night to UMass Lowell. After taking the lead in the final frame, the Riverhawks mounted the comeback with two goals in the final ten minutes, including a game-winner with under two minutes to play.

Tied 2-2, Patrick Giles appeared to disrupt Lowell’s charge towards the net by tripping up and knocking the puck loose from Ryan Brushett. Yet, the loose puck slid right over to Isac Jonsson. He passed it forward to set up Zach Kaiser just behind the face-off circle. Kaiser shot the game-winner right through the five-hole to give the Riverhawks their first lead of the game with 1:54 remaining.

With just under ten minutes to play in the third period, BC found themselves on the powerplay following a hooking penalty. Instead of extending their one-goal lead, the Eagles allowed Lowell to find the back of the net despite being a man down.

In what looked like an attempt to clear the puck out of their defensive zone, Carl Berglund ended up finding Brendan Enghum open just behind the blue line to give the Riverhawks a two-on-one break toward the goal. Enghum passed the puck back to Owen Cole, who one-timed the equalizer into the back of the net before Eric Dop even had a chance to react. The goal to tie the game at two apiece was also Cole’s first career collegiate goal. 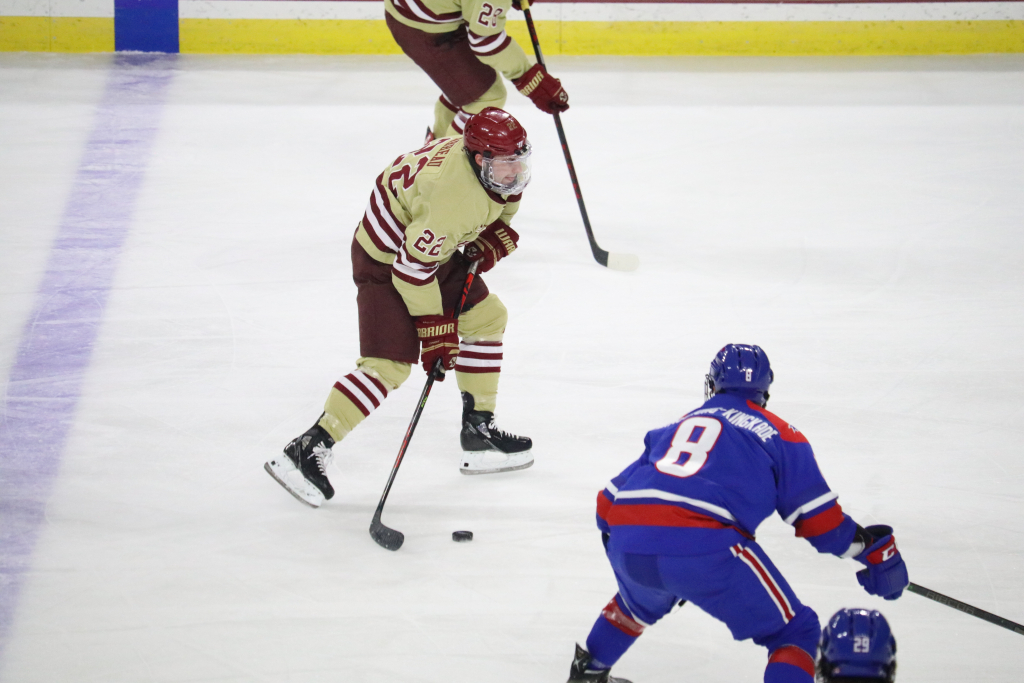 Trevor Kuntar was essential in creating offense for the Eagles. He finished the game with two points, including an assist on the opening goal in the first period, and then scored himself in the third to take the lead again.

The assist came less than halfway through the first period when Kuntar intercepted a Lowell pass to give BC the puck near the goal. Instead of trying to force the shot himself, Kuntar found Gentry Shamburger open near the boards. Shamburger slammed a powerful one-timer to give BC a 1-0 lead.

The Eagles’ first powerplay of the third period was more successful than the second. Holding a one-man advantage following an interference penalty, Kuntar was holding the puck in the offensive zone. With one defender sitting on top of him, another converging from his other side, and a third defender coming at him from the front, Kuntar boldly wristed the puck from the high slot into the top shelf to give the Eagles a 2-1 lead.

Dop finished the game with 27 saves, a solid number that was able to keep BC in the game. Notably, he made one great save late in the second period, when he sprawled out into nearly a split to block a fast-break one-timer with his right leg to keep the game tied at one going into the final period.

The Eagles (10-13-4, 5-9-3) currently sit at 8th place in the Hockey East, just one point ahead of New Hampshire. Their next game will come against Northeastern in the first round of the Beanpot Monday night. BC surely needs to take the win in the TD Garden in order to create the momentum shift necessary to salvage their season.