After playing the No. 7 Blue Devils tight in the first half, Boston College faded in the second in their 72-61 loss to Duke Saturday night.

The win was fitting for Duke head coach Mike Krzyzewski's last game in Chestnut Hill, as he will retire after this season with a 19-2 record against the Eagles in regular-season ACC play.

James Karnik did just about everything he could to keep the Eagles in the game. He looked like the best player on the court in the first half, scoring an efficient 12 points on mostly close-range, back-to-the-basket shots. He slowed down in the second half, but still finished with a game-high 21 points.

After a slow start, Demarr Langford Jr. came alive in the second half when he took a hard flagrant foul from Mark Williams, who hit him in the face with his forearm while Langford was going for a layup. He made both of the free throws and scored a layup when the Eagles gained possession back due to the flagrant. Immediately after, Langford Jr. came up with a steal on the defensive and brought it back to the other end to get another two free throws off the turnover. He finished the game with 16 points, including 10 in the second half.

Interior defense was the main reason BC was able to stay in the game as long as they did. The Blue Devils were hardly able to get off a clean look close to the rim. While Duke under Krzyzewski has traditionally been a team made up of players who can space the floor well, their Paolo Banchero centered offensive game this year primarily relies on points in the paint. The Eagles’ ability to clog the lane forced the Blue Devils to take three-pointers or tough midrange shots that they didn’t want.

BC head coach Earl Grant emphasized the importance of keeping Banchero out of the paint after the game. The big shift for Duke was when they shifted Banchero from playing along the side to playing from the elbow, because it made it harder for BC to double team him, Grant said.

“I think they made a really good adjustment. They moved him to a different spot where we couldn’t really trap him or double him, and he was hard to guard one-on-one,” Grant said.

Jaeden Zackery was also a major defensive disruptor, coming away with five steals. 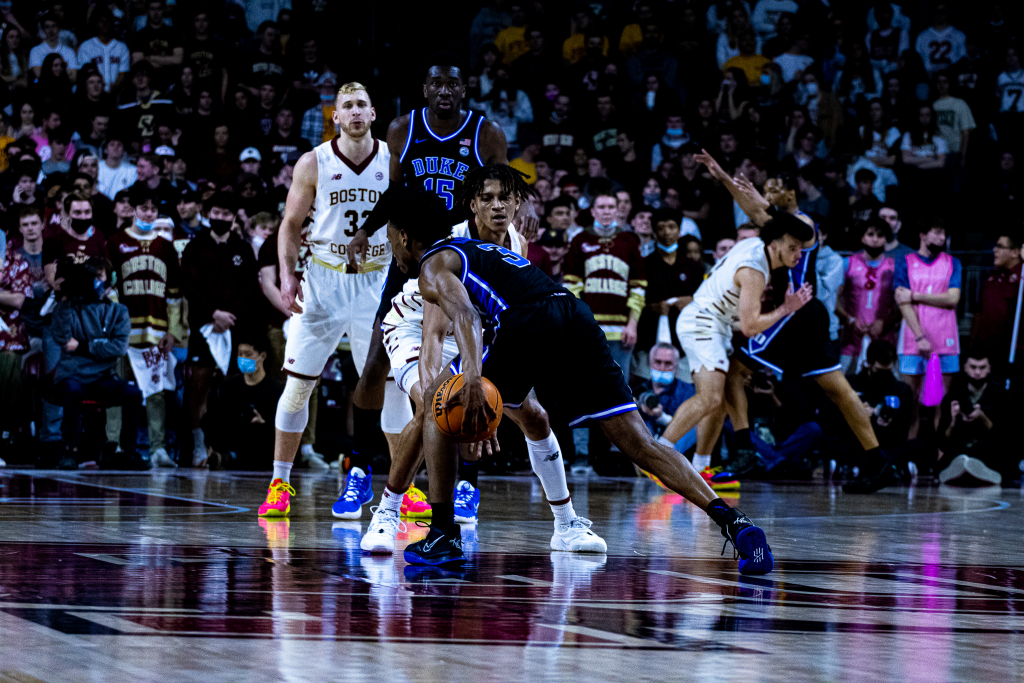 The Eagles often played with a four-guard lineup due to injuries to Quentin Post and TJ Bickerstaff.

Free throws were a central part of why Duke was able to walk away with the win. They didn’t miss a free throw through the first 29 minutes of the game, while the Eagles didn’t make one until past the 22-minute mark. BC drew more fouls than Duke did, but they were typically either offensive fouls or not in the act of shooting. As a result, they often did not result in free throws, and when they did, the Eagles failed to capitalize.

The crowd was roaring throughout the game, but the Duke fans in attendance got progressively louder. While the first half was marked by cheers when the Eagles scored, the second half was characterized by chants of “DE-FENSE” while the Eagles were trying to score. By the final ten minutes, the BC fans behind each basket began to exit as the Duke lead continued to extend. Duke fans stayed, as the sidelines were still largely covered in a sea of blue until the final buzzer.

The Blue Devils led by 21 points with four minutes to play, but an 11-1 close-out run by the Eagles after Banchero and Williams left the game put some window dressing on the final score.

Boston College honored Krzyzewski’s 47-year coaching career by making a pregame donation to the Emily K Center, a foundation named after Coach K’s mother that works towards providing educational opportunities for over 2,000 low-income students in the Durham, North Carolina area.

While most schools he has visited this season have tried to honor Krzyzewski’s legacy in some way, Krzyzewski said postgame that he wasn’t looking for a farewell tour, and that reflecting on his past was something he’d save for after the season ends.

“I’ve been the luckiest guy ever in coaching. 47 years at West Point and Duke, 11 years with Team USA, you can’t get luckier than that. It’s been an honor, and I’ll look back on it, but not now,” Kyrzezewski said, “and not when they were making an 8-0 run on us and we’ve given up a 16-point lead.”

After their loss to the first-place Blue Devils, the Eagles (9-14, 4-9) sit at 12th in the ACC standings. They’ll look to right the ship when they leave for a two-game road trip next week, starting at Notre Dame on Wednesday night.