The No.5 seeded Black Bears upset the No.4 seeded Eagles in the first round with a power play goal from captain Taylor Leech in the second period.

Leech scored on a big rebound that popped out to the point, allowing Leech to rifle off a low wrist shot that beat Levy five-hole to make the score 2-1 Black Bears. Courtney Collarullo and Mira Seregély recorded assists on the play. Maddie Crowley-Cahill had taken a two-minute minor for tripping that led to the goal.

Willow Corson opened the scoring for the Eagles at 13:53 in the first period. Alexie Guay rifled off a shot from the left wing that Black Bears goaltender Jorden Mattison knocked to the side. Corson, standing on the goal line, cleaned up the rebound by tucking it inside the opposite post to give the Eagles’ a 1-0 lead. Caroline Goffredo and Guay received assists on the goal.

Midway through the first, Levy made a point blank save on a Black Bear’s shot. The rebound popped out to Mira Seregély, who forced a sprawling save out of Levy in the goal crease. Levy’s quick work with her stick prevented Maine from tying the score and allowed the Eagles’ to gather the puck for a breakout attempt. 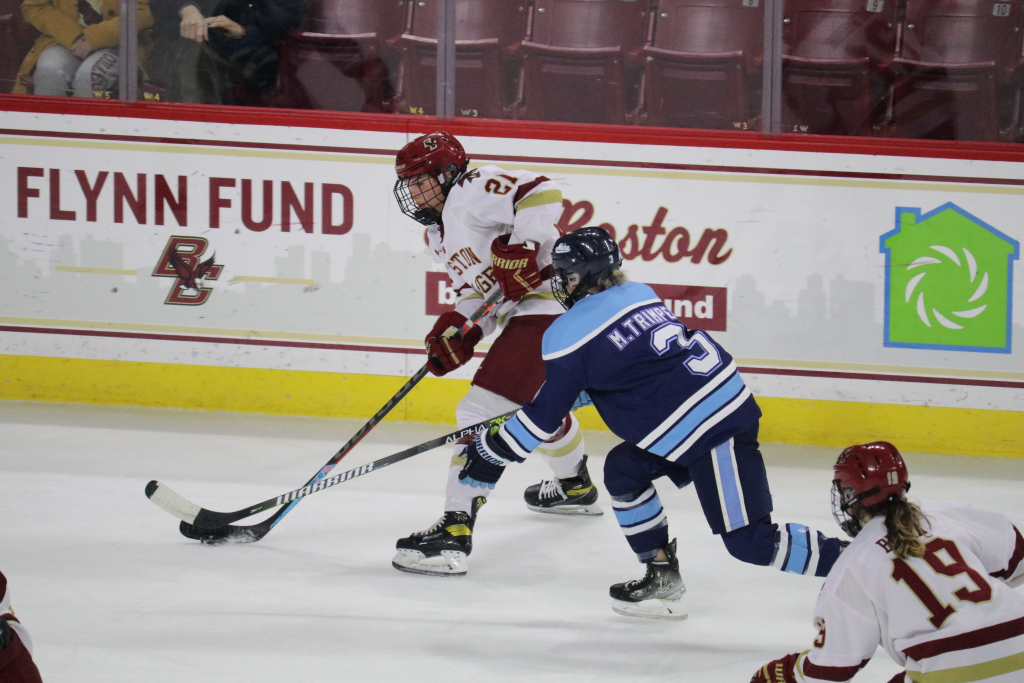 Maine answered with two seconds left in the period. A sloppy clearance from behind the net by the Eagles got away from Maddie Crowley-Cahill who was positioned in front of the goal, allowing Alyssa Wruble to collect the puck and score on a wrist shot that trickled past Levy and into the back of the net.

In the second period, Maine looked more collected, dominating the faceoff dot 13-9. The Black Bears also increased the number of shots on goal, forcing Levy to come up big in several situations, including a two on one early in the second. The Black Bears outshot the Eagles 21 to 15 in the second, opening up the ice and exploiting holes in the Eagles’ defense.

Goffredo led the charge in the third as the Eagles attempted to even the score. The sophomore protected the puck in the offensive zone, creating space with her stick work and finding open passing lanes while controlling the pace of the game. Goffredo had two high danger chances in the third as well. She had a shot from the center that rang the crossbar and another attempt on a breakaway chance that was stopped by a well-timed poke check from a backchecking Maine defender.

Despite pressure from the Eagles and 18 shots in the third period, dangerous chances failed to materialize as only 8 of those attempts were on goal. Errant passes and a failure to keep the puck in the Black Bears zone, as well as losing key faceoff battles, hurt the Eagles late in the game as it disrupted the speed of play and forced the Eagles to restart breakout attempts.