ASO's Fashion Show is a Layered Celebration of African Culture

Every year, the African Students Organization of Boston College puts together a one-of-a-kind spectacle known as the ASO fashion show. This is one of the most highly anticipated events in BC’s AHANA community, and this year’s show did not disappoint. The breathtaking fashion designs are only one part of the production. The models, music, dance, set design, and acting also come together to make this event truly special.

The goal of the fashion show is to showcase the vivid and colorful style of African designers, and to give a platform for Black and African culture to be shared and celebrated on stage. ASO co-president Bilguissa Barry adds, “Africa is so diverse and rich, and we want to represent and showcase this. The media often misrepresents Africa, and we aim to break down these narratives and bring forth new ones. We are all so proud of our African identities, and this is one of the ways we can celebrate our culture while engaging with our community here.”

The production had many cultural influences, and the night definitely felt like a celebration. The atmosphere of the show, as described by ASO co-president Edil Mohamed, is “lively and vivacious. Watching your friends strut on stage with cameras flashing and music blasting creates an intense atmosphere that keeps the audience on their toes, waiting for the next model.” The audience was enthusiastic, to say the least, and did a wonderful job of hyping up and celebrating their friends and peers.

The elegant dresses and garments donned by the models were designed by three fashion brands that specialize in Afro-centric design creation. Omooba Fashions, By Atta, and EzClothin created beautiful designs that showcased the beauty and sophistication of African print clothing. The designers used numerous prints unique to specific cultures such as Kente, which belongs to Ghana, and Ankara, which belongs to Nigeria. Colorful clothing is also an important characteristic of fashion and style in the African diaspora, and the colors chosen were very intentional and provided a vibrant and exciting quality to the clothing.

Music is another important form of expression in the African diaspora. Afrobeats is the most popular type of African music, thanks to the presence of international artists such as Burna Boy and Wizkid. However, the ASO e-board, which has people from countries such as Guinea, Ethiopia, Eritrea, Somalia, and Cameroon, chose music representative of Africa’s whole continent and diaspora.

Not only was the music blasting, but the dancers also brought an exciting and infectious energy to the auditorium. Boston College’s premier African dance team, PATU, performed a captivating routine full of intensity and expression. PATU stands for Presenting Africa To U and aims to promote and celebrate African culture through dance. The performance utilized lighting, color, and silhouettes, and was very well choreographed.

The production also featured a short film produced, written, filmed, and acted out by the members of ASO. This year’s film followed the fictional princess Angel, played by Aiche Ba '23, and her journey to find a suitor at the masquerade ball in order to inherit the kingdom of Serenity. Angel comes from a family that values tradition and culture very highly, but she does not hold those same values. Edil Mohammed comments, “For many Africans living in the diaspora, we are often tied between what’s best for our family and following our dreams. Whether it is about studying a specific major or being forced to practice certain traditions, the new generation of Africans are trying to build their own world and make sense of life for themselves. Angel had the courage to step away from her responsibilities to chase her dreams, and I think she served as an inspiration for others who may not have the courage to do the same.”

From the script writing to the auditioning, acting, recording, performing, posing, dancing, designing, and rehearsing, this production required a lot of preparation that paid dividends. Every detail down to the models’ walks and poses were tirelessly practiced and perfected, making the whole production incredibly detailed and precise.

The ASO fashion show is so much more than an entertaining and beautiful production. It represents a community on campus full of individuals who are incredibly supportive of each other, immensely passionate about their heritage, and proud of their culture. The fashion show was an inspiring experience that encourages us to live boldly and be proud of who we are and where we come from.

“I’m so proud that we were able to put this show together. I’ve been on ASO ever since my freshman year and it is a blessing to have been a part of such an amazing family. This show was everything and more for me. It was amazing to watch all the things we brought together to create an environment so vibrant and to share everything I love with my BC community. We thank everyone that came to support us and what we do.”

Follow the African Students Organization on Instagram to stay updated on future events, and make sure to attend next year’s fashion show–you won’t want to miss it! 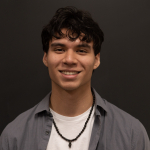