Mixed-Media Installation by BC Professor Explores Healing and Joy

Rarely do artists have the courage to break the static pattern of a traditional art gallery, but such is not the case for professor and multimedia artist Mark Cooper. It is no easy feat to organically weave together wood sculptures, ceramic pieces, rice paper collages, tapestries, video art and multi-layered paintings into one installation in a way that doesn’t look chaotic. However, it looks that way when Cooper is behind the process.

His newest exhibit, titled “Unbounded: Angels in the Nursery,” took five days to install leading up to its opening night on February 26 at the gallery Howl! happening in New York City.  As I tagged along with a friend for the final two days of the installation, I was able to see the inner-workings of the installation process: meandering 15-feet tall ladders in between delicate wood sculptures, push-pinning layers of painted rice paper on the walls into organic shapes, and hanging up colorful kites with dramatically long tails across the ceiling. All of which was mediated by the consistently calming presence of Cooper who was confident the installation would come together.

He was proven right on the opening night, which received bouts of praise from a crowded room. “I am thrilled with the installation; I don’t think there’s anything I would change,” Cooper explained. “Everybody [at the opening] was so positive– bubbling over with ‘Oh, we needed this!’ … I was thrilled.”

“Unbounded: Angels in the Nursery” presents a feeling of joy, limitlessness, healing, and connection in not only the colorful pieces themselves but in how they interact as a whole. The installation presents tall ceramic works in the lower level, wood sculpture shelves stacked with smaller ceramic pieces in them in the middle, and a collage of hanging art on the walls and ceiling surrounding it all. As Cooper explained it, these spatial choices presented a landscape-like environment, with islands, sea, mountains and sky represented. This allows for a highly interactive and imaginative space for the viewer, taking in all of the intricacies as they walk through the display.

Beyond evoking a sense of joy, the exhibit induces a similar sense of wonder. When the pieces are seen all together, they invite curiosity and imagination in the viewer as they engage to make sense of the exhibit. It’s a playful space– even playground-like if the viewer allows themselves to tap into their inner child.

Cooper explained that some of the inspiration for the exhibit, including the title, came from a longtime friend of his, who has done work raising money for children in low-income communities. This friend, who was a part of the paper, “Angels in the Nursery,” has done work in finding the positive to heal from trauma, particularly among children. Cooper said he took insight from this in reflection of persevering in the chaos of our constantly-changing world. Amidst the exhaustion of the global struggles surrounding us, it is equally important to confront those challenges while continuing to find the joy around us. “In the contemporary art world that I deal with, it’s quite often– as it should be– about what’s relevant in the moment. There’s a lot of things about societal issues that artists incorporate into their work… and [for me] to put a bunch of smiling faces doesn’t seem risky, but it’s risky!” Cooper said.

Cooper has created other works that tackle those contemporary issues, most recently collaborating with other BC students and staff to address the fast-fashion crisis in the sculpture Aftermath. The piece, which will be brought to the Smithsonian later this semester, opens up a discussion about the consequences of rapid, impulsive consumerism in industries like fashion.

To balance societal engagement and find personal healing should really be the aim of our generation as we commit ourselves to creating a world of compassion, justice and equality. And what is a better outlet to find that balance than art? Not only does “Unbounded: Angels in the Nursery” bring out an expressive joy for its viewer, it also demonstrates that collaboration and cooperation are really at the center of progress. “Having all of those objects in there together shows that the sum of the parts is greater than the individual parts… I’m interested in the metaphor of, ‘If we work together, we’ll make it a better world,’” Cooper illustrates. 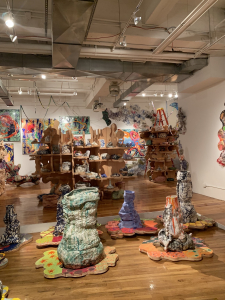 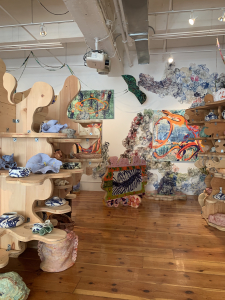 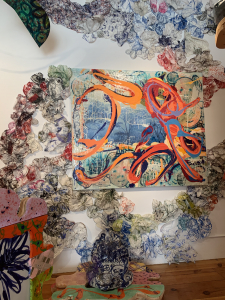 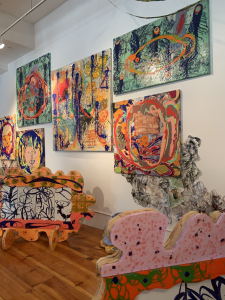 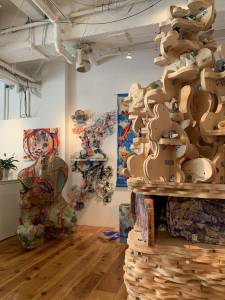