The sculptural installation “Legacies” by Rose B. Simpson explores the intersections of self-love, grief, spirituality, post-apocalyptic thought, and parenting in a profoundly human way. As she explains in the exhibit’s introductory wall text, the work is intended to “translate our humanity back to ourselves.”

Held at the Institute of Contemporary Art in Seaport, the exhibit opened in August and will be on display until the end of January 2023. “Legacies” is made up of figure sculptures, ranging from roughly three to six feet in height, which are evenly spaced around the gallery on wooden platforms. With teal-painted walls surrounding the figures, they present as a sort of landscape when seen in unison. The figures are mostly made up of earth tones: creams, browns, oranges, blacks, and yellows. The faces of all of the sculptures are entirely neutral and have hollow eyes, yet so much visceral emotion can be captured by their composition. 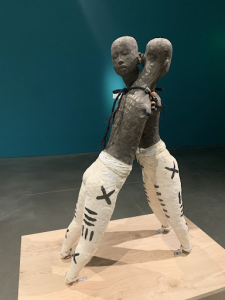 Simpson attended Rhode Island School of Design for an MFA in ceramics and also received an MFA in Creative Non-Fiction from the Institute of American Indian Arts. Her work is recognized internationally and can be seen in museums around the country. Simpson is a sculptor in ceramics, metal work, wood, and automobile design, and her pieces in “Legacies” combined many forms of media in the figures, such as clay, twine, leather, metal, wood, and adornments of handmade jewelry. From Santa Clara Pueblo in New Mexico, she is a descendant of many Indigenous women who used clay for craft and for creativity, and she explains the spiritual significance of clay as something “ancestral” to her. Simpson also uses ceramic jewelry from other Indigenous women as added accessories for her sculptural figures, though it was not specified if she did that for the figures in this exhibit.

Simpson came to the ICA on September 22 for “The Artist’s Voice,” an event during which she explained much of her process and reflected on the sculptures. The event was widely attended by many in the Boston area, who were profoundly moved by what Simpson shared. Some were even brought to tears by her vulnerable discussion of self-love, mothering, spirituality, and grief. 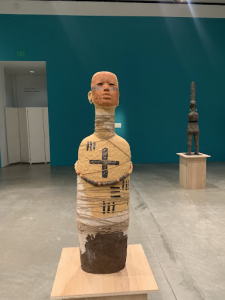 The two-figure sculpture that sits in the center of the gallery, “Genesis Squared,” features a mother holding her child. The sculpture has two features of metal plates with intricate cuts on them: one as an adornment on the mother’s head that depicts two figures embracing one another and the other being a box that the mother stands on made of metal plates that represent historical traumas of her ancestors. While this sculpture certainly shows a mother and her child, Simpson explained during the discussion that it also represents her nurturing her inner child in its need for love with an embrace. 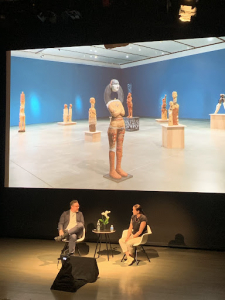 She explained that as the granddaughter of a woman that was a victim of the Native American Boarding Schools, her grandmother’s trauma had lasting effects on her experience as a child. Simpson’s mother was deprived of a mom growing up because the American Indian Boarding Schools had taken her mother away, so that denial had subsequent impacts on Simpson’s development. As a parent now, she explained the need for treating herself with nurturance and compassion, which she may not have received as a child, in order to be the kind of mother she wants to be. 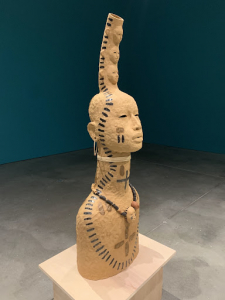 Towards the end of the discussion when audience members were able to ask questions, someone inquired as to whether or not she intentionally created figures that lacked arms or hands. Simpson explained that as an artist, she often places value in herself in the things that she can create or do with her hands. Accepting that she is enough as she is as a human being, without consideration of what she may be able to do, is a pursuit she was trying to consider in her armless figures.

The sculptures feel rich with wisdom in their ability to capture the spectrum of the human condition. Simpson’s talent is undeniable, and anyone that wants to take in her exhibit’s intersection of strength and human gentleness can see the pieces until January at the ICA.