In the spring semester of her freshman year at Boston College, Zarah Lakhani’s life came to a crashing halt when she was diagnosed with lymphoma. Two years later, the now junior is tackling managing her non-profit organization, Care for Chemo, while in remission. I sat down with the Applied Psychology and Transformation Education Major to talk about her journey starting a nonprofit and her lessons learned after battling cancer.

So obviously, your lymphoma diagnosis has a huge impact on your life. Could you share a little bit about your process of getting diagnosed and then going through treatment while in college?

My diagnosis was such a shock. On a random Friday night, I felt my heartbeat increase exponentially. I thought it was weird so I went to UHS and they agreed I had a fast heartbeat and also found a heart murmur. So I went to Newton-Wellesley and they did a bunch of tests and they found a 10 centimeter tumor pushing against my heart and my trachea. At the same night, they did a biopsy, and that's when they found out it was lymphoma. I think I was literally in shock. My dad had traveled to Boston and was at a hotel nearby. I remember he came to my dorm and asked me, “Oh, what are we going to do?” I said I was going to go back to Dallas and do treatment. So he told me to start packing. And I said, “No, I'm going to go to class.” And then I went to my theology class. I think I just didn't accept it. I'm not going to lie, it took me a really long time to accept because I think it's just hard to accept that your own body is fighting against you. Anyways, long story short, I ended up packing up in three days. I went back to Dallas, someplace that I just didn't consider home at that point. I had just moved there four months ago, and when I got there I started chemo immediately. I really struggled with my first chemo because I just didn't know the side effects of it. But by the time of my fourth or fifth chemo cycle, I was able to really figure out how I can manage my side effects. And it made my quality of life so much better, which made it easier to beat it.

What would someone find in an average care box and what is your inspiration for these items?

When I was on chemo, I dealt with the worst nausea ever, and the doctors could really only give you medication with really bad side effects to fix it. I ended up using these acupuncture bracelets that actually press on a pressure point in your wrist that helps to stop nausea, which I thought was super cool. And of course, it doesn't have any side effects, so I would wear it all the time. Obviously, I included a blanket because hospitals are always really cold. Also, with chemo, your body can't maintain temperature that easily. So it always helps to just have that extra layer with you whenever you can. I added an electric heat pad in the box, too. After chemo cycles, all rapidly developing cells are destroyed, including all of your immune system. But you’re able to get this shot which makes your white blood cells grow exponentially faster. The side effect of that is unfortunately extreme bone pain. So the only thing that would help me through the bone pain was a heat pad. As I mentioned before, chemo kills all rapidly producing cells, which are your salivary glands too. Biotene toothpaste really coats your mouth and it helps to retain the water a little bit more. I had a couple of things for mental health as well, like a journal because I think that it's really important to write down everything that you're going through. I think it's very easy when you're going through any type of hardship to focus on the negative or just focus on everything that's not going right and so I had to take out time for gratitude and recognizing that there are things going my way. I think it's so important to recognize the small wins.

What was the process of growing your nonprofit?

Well when I was going through chemo, I started making boxes and giving them out to my clinic. And a lot of patients would reach out to me, and they'd said they used every single thing in my box. So I just continued making them casually when I could. But I went to a doctor's appointment this summer with my dad and my doctor, where they were like,  “If you want to reach more people, and make an impact on more patients, you're not going to be able to do that with just self funding them.” So they actually suggested starting a nonprofit. I kind of reflected on it and thought, “Okay, yeah, maybe I do want to do that.” But I’m not in CSOM, and I don’t know anything about business. So I watched countless YouTube videos every day, trying to figure out the steps for creating a nonprofit, which is a lot of steps. But I had a lot of help. My dad and my brother are both into business, so they were able to help me a bunch with things like website design, marketing stuff, and outreach. I was able to gain a lot of popularity with it though. Over the summer I had a couple of fundraisers, which all were super successful in Dallas and New York. Now, I'm just trying to bring it to BC because I think it'd be just a great way to give back to the Boston community, which we're obviously such a prevalent part of. I think that a lot of people just don't think about cancer until it personally affects them. So it would just be a great thing for people to have on their mind that there are so many patients that are going through so much worse than what could be imagined. And I think it's so important to recognize that we're so small in the equation of everything. To me, to be on campus is huge, because I was not here a year ago, and to be able to see people around me who are healthy and walking, it's great.

What ways could somebody support your nonprofit?

There's a couple of ways. Obviously, people can reach out to me. I'm always looking for people who want to stand at fundraisers with me, pack boxes, deliver to patients, and all of that stuff. I do have an intern with me right now and there's a couple of more people on our board, so we're always just looking for people to do that as well. People can donate obviously, and help sponsor boxes. Sometimes people want a specific box too, for someone they know. So there's a forum on our website actually, for that. You can build your own box where you donate like $75 to $80, which is what each box costs and your box really is personalized towards that patient and it will be delivered to that patient, which is just another way for people to get involved.

What is one thing you would say to someone who is recently diagnosed with cancer and is unaware of what's about to happen and how they're going to get through it?

Well, first, I would give them my box. But I think I would say the most important thing for me is just taking it one day at a time. And sometimes one day at a time is a lot for patients who are in the hospital and are just dealing with all these side effects at once. So I would say take it one hour at a time, one minute at a time, because we really need to break down the scale of it. And understand that if we can make it through that one day, that one hour, that one minute, it can make it through the whole process. And honestly, there is hope after treatment. There's a lot more to look forward to and it's just honestly a greater appreciation for life. I'm just so happy to be alive.

If you’re interested in learning more about Care for Chemo, visit www.careforchemo.org or check out @careforchemo_ on Instagram. 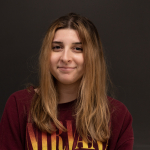