Home›News›BC News›"Rebels With a Cause": Mouly and Spiegelman Stress the Role of Graphic Novels in Art

"Rebels With a Cause": Mouly and Spiegelman Stress the Role of Graphic Novels in Art

BC News, News
by David Reddig

“Comics are the best way to get into an artist’s head, not novels, not paintings…artists use their hands and their mind when making a comic and the importance of that cannot be overstated,” said esteemed graphic novelist, Art Spiegelman, at the end of his talk with his wife and fellow graphic novel pioneer and publisher, Françoise Mouly, on September 28, 2022 in Boston College’s very own Robsham Theater. The conversation was full of playful banter between Mouly and Spiegelman, each highlighting their influential journey within the ever-expanding world of comics. This talk coincided with the McMullen Museum of Art’s current exhibit, American Alternative Comics, 1980–2000: Raw, Weirdo, and Beyond, which beautifully illustrates the growth and changes within American comics which was, in part, spearheaded by both Mouly and Spiegelman through their joint creation of the comic anthology, Raw.

A self-proclaimed “a rebel with a cause,” Françoise Mouly was born in Paris in 1955, moving to New York in 1972. Immediately immersing herself in the American alternative art scene, by the late 1970s, Mouly was ready to embark on the creation of a comic anthology that gave voices to underrepresented comics. This comic anthology would end up being Raw.

During the talk, Mouly said she wanted to “reveal the world of comics…to make an explosion of comics and the ideas within them.” With this focus on revolutionizing and broadening the world of comics, Mouly was focused on the quality of the magazine issues, saying she wanted the issues to be “high quality, non-disposable, and if nothing else, a work of art.” To do this, when starting to publish the magazine in 1980, Mouly meticulously picked out the paper the comics were going to be printed on, included bubblegum and tickets within the individual issues, and worked with artists who knew what they wanted their comics to look like. All of these aspects gave Raw a “design aspect” that distinguished it from other comic anthologies and magazines and worked perfectly with the “general interest” theme of Raw. There was no beat to Raw, no theme. The magazine tried to encourage many different art styles and many different stories thanks to the guidance and intuition of Mouly herself while publishing the magazine.

The meticulous and inspiring creation of Raw did exactly what it intended to—it made an explosion in the world of comics, an explosion that is still felt today. Raw broke down the prejudices surrounding graphic novels, mainly the thought that they were juvenile, by giving voices to the artists and showing the power graphic novels hold to tell real, powerful stories in a creative and entertaining way. When asked about the juvenile stigma behind comics, Spiegelman said, “comics give a voice to the individual to tell their story…to explain their reality, because it looks like reality is the new drug.” Graphic novels give artists a medium to tell their story in exactly the way they want to. These stories are not childish nor juvenile, but are rather important, powerful, and oftentimes, very serious.

Take the case of Maus or Wake, for example, with Maus depicting the story of a Holocaust survivor and Wake telling the underrepresented stories of Black women-led slave revolts. Growing off this point, later in the talk, Mouly advocated further the powerful nature of comics, saying that “ideas that come from a dark place and are full of emotion make the most powerful comics, and to think that is juvenile would be simply incorrect.”

In a day and age where visual literacy is paramount, and many adults are visually illiterate, graphic novels and the destigmatization of their supposed “juvenile” nature are of the utmost importance. Mouly’s current work as the art editor for the New Yorker and publisher of TOON Books focuses on this destigmatization of graphic novels, especially in relation to them as learning tools for children. When talking about the importance of visual literacy for kids, Mouly said, “comics allow children to look for themselves and to learn the mechanics of reading through comics which forces children to extract the meaning from the comics themselves.” This usage of comics as a learning tool for both children and adult students does not add to their presupposed “juvenile” nature but rather refutes it, showing that comics are no lesser than a book or novel when it comes to teaching children or adults. In fact, graphic novels are often better learning tools than books or novels because they allow for readers to better understand and empathize with the message the artist is trying to convey.

Mouly and Spiegelman emphasized this importance of graphic novels within our society throughout the talk, heavily stressing that comics play a role not only as entertainment but also as a great educator and emotional outlet. Spiegelman finished the talk by advocating the continued support of alternative comics, saying that an “emphasis on the art” in every aspect of life will lead to a better understanding between us all, and graphic novels are a great place for that art to manifest. 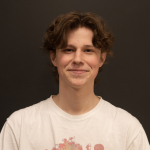